With 62 years of experience selling top quality boat docks, sections and accessories made in America, Alumi-Span offers boaters an outstanding product they can rely on. Please read on as we tell the story of our company and its origins here in Michigan. We plan on serving you far into the future with the same dedication and innovation that we used to start this company.

Alumi-Span began in 1956 as a division of a larger company called Metalloy Foundry. The Metalloy founder, Dick Berlin, was an avid boater and also a mechanical engineer. 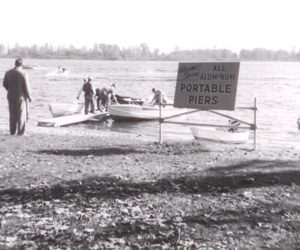 He decided to develop an improved boat dock system that would use aluminum castings and poles rather than heavy, rusty iron and steel supports that were the standard of the day. The most important feature of the new pier however was the use of an all aluminum deck made up of three 1'X10' interlocking aluminum boards that sat on the aluminum supports. It made a much lighter boat dock then any in existence at the time. Some of these early Alumi-Span docks are still in use.

It was around 1961 that Berlin developed a new version of the all aluminum boat dock sections that was to become the industry standard. Using "F" shaped aluminum side stringers as beams, several interlocking aluminum boards were inserted transversely into these stringers creating an even lighter dock with more strength. The Alumi-Span system was born!

While the original boat dock was successful, the newer version was less expensive with a better non-slip surface. You could also substitute pine or redwood for the aluminum deck to create an inexpensive boat dock that was still quite a bit lighter than an all wood dock.

Alcoa (Aluminum Company of America), who worked with Metalloy in the development of this dock named it one of the top new aluminum products of the year and the new design was featured in over 20 industry publications.

Rex Hoover was Dicks' cousin and the Financial Officer at Metalloy. He was named manager of this division and within a few years over 200 marinas all over the northern states were selling this unique product. Many competitors started copying this pioneering design but Alumi-Span remained the leader by constantly improving the product. In 1964, Rex bought the company from Metalloy (renamed Alumi-Span Inc.) and continued to manage it until 1982 when Rex's son Mike took charge. Mike Hoover along with his wife Kay then successfully managed the company for the next 20 years, but by 2002 a long term illness forced Mike to sell the company. Coincidently, Dave Berlin (Dick's son) was coming to the end of a long career as CEO of Metalloy Corp. He talked to Mike and Kay and after a 40 year absence; the Berlin family owned it once again. Kay is still involved with the company as bookkeeper and Mike is now retired.

Today, 40 to 50 year old Alumi-Span boat dock sections are still found in service and many of our marina customers are in their 2nd and 3rd generations of management. While there are several types of engineered docks out there, the "F" stringer style remains the most practical design for the vast majority of shore applications. Alumi-Span is the clear engineering leader for this type of boat dock and the tradition set by the Berlins and Hoovers hasn't changed; no cutting corners, lots of innovation and most important - honest value!